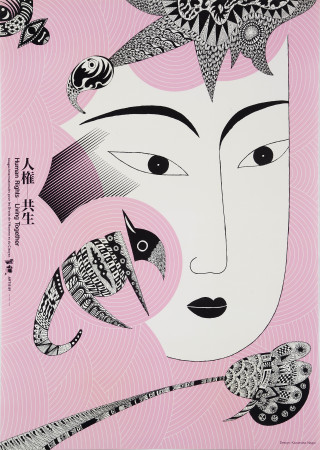 Colorful Japan
226 Posters from the Collection

The exhibition ‘Colorful Japan’ shows 226 Japanese posters in the Gallery of Honor of the Stedelijk Museum – from floor to ceiling.

The exhibition showcases a cross-section of Japan’s unique graphic design with work by designers such as amongst others Hiroshi Ochi, Kazumasa Nagai, Ikko Tanaka, Yusaku Kamekura, Mitsuo Katsui, Shigeo Fukuda, U.G. Sato, Ken Miki and Eiko Ishioka. The oldest poster dates from 1937, the most recent from 2018. One wall of the exhibition is devoted exclusively to the internationally-famed graphic designer and artist Tadanori Yokoo. In 1974, with the help of Watano, the Stedelijk was the first European institute to display his work.

Spotlighting 226 Japanese posters from our collection, Colorful Japan literally explodes with color. With posters floor-to-ceiling, the Hall of Honor walls immerses visitors in a kaleidoscopic world.

Compared to its European cousin, Japanese poster design is a relatively recent discipline. It wasn’t until the early 20th century that posters became used for advertising. The posters vary widely in style; some flaunt vivid tones, and others are quiet, reserved and minimal. Japanese designers explore a very different visual language to that found in Europe. Japanese visual culture is less direct and more nuanced, very often poetic. Meaning that, to our eyes, the image doesn’t always seem to match the subject, like a magnified character with a lyrical text for a pop concert, for instance.