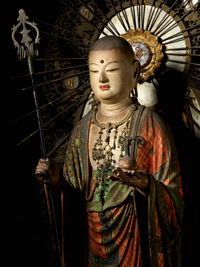 Masterpieces from the Fujita Museum:
A Brilliant Universe Reflected in a National Treasure
Yōhen-Tenmoku Tea Bowl and Buddhist Art

The Fujita Museum, located in the heart of Osaka, is an art museum with one of the world’s most distinguished collections of Japanese and other Asian art, including 9 works designated National Treasures and 53 Important Cultural Properties. The museum was opened in 1954 (Shōwa 29) to make available to the public works of the fine and applied arts collected over two generations beginning with Meiji-era entrepreneur Fujita Denzaburō (1841-1912), and followed by his sons Heitarō and Tokujirō.

The collection, which contains roughly 2,000 works, spans various genres such as tea-ceremony utensils, ink paintings, calligraphy, Noh costumes, picture scrolls, Buddhist icons, scriptures and ritual implements and archaeological artifacts. Included among these are many works of Buddhist art that have a close association with Nara. The exhibition on this occasion is unprecedented in scope with all galleries in the new wings of the Nara National Museum being employed to display the masterpieces of the Fujita Museum collection while the presently shuttered museum prepares for re-opening scheduled for spring 2022.

Being introduced at this time is one of only three extant National Treasure Yōhen-Tenmoku Tea Bowls, a number of chiefly Buddhist works such as the “Illustrated Life of Tripitaka Master Xuanzang” (Genjō Sanzō’e), “Divinely Inspired Reception of the Two Great Sutras” (Ryōbu Daikyō kantoku zu), and the “Sutra Box with Design of Buddhist Virtues in Makie Lacquer” (Butsu kudoku maki’e kyōbako), as well as a variety of items that have never been displayed outside the museum.

We are highlighting the achievements of Fujita Denzaburō and his offspring, who by investing their extensive private fortune in collecting precious cultural assets that were in danger of being lost and dispersed during the crisis at the start of the modern period, built a collection that truly deserves to be called a “Palace of National Treasures”. 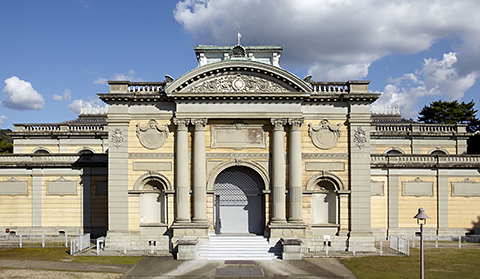