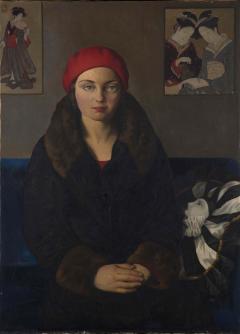 This special exhibition introduces the creations of Hamaji Seimatsu (1885-1947), a Western style painter from Wakayama Prefecture who studied in the United States and France, along with the works of his friend artists and other artists from the same time period.

Before World War II, numbers of Wakayama natives moved to the United States as immigrants, and Hamaji was one of them. Born in Tsuga, Kushimoto at the southern tip of Kii Peninsula, Hamaji followed his elder brother to the United States in 1901 (Meiji 34). After graduating from the School of the Museum of Fine Arts, Boston (present-day SMFA at Tuffs University) in 1909 (Meiji 42), Hamaji moved to New York where he made a living in commercial designs while created his own artworks. He also spent time to interact with other Japanese painters who resided there at the time, such as Ishigaki Eitarō from Taichi (a town located near his hometown in Wakayama) and Kuniyoshi Yasuo from Okayama Prefecture. He returned to Japan in 1920 (Taishō 9) and established a research institute of Western style painting in the city of Shingū where is slightly north to his hometown. In 1925 (Taishō 14), Hamaji moved to the United States once again and stayed there until he moved to Paris in 1927 (Shōwa 2). During his stay in Paris, he submitted his paintings to several large public exhibitions (salon) successfully, and shortly after his return to Japan, he won a prize in the exhibition of the Imperial Academy of Fine Arts for Red Hat in 1928 (Shōwa 3). While his reputation was enhanced, Hamaji participated in the formation of Daiichi Bijutsu Association in 1929 (Shōwa 4) and kept being active in the association, Imperial Art Exhibition (Teiten) and the reorganized Bunten exhibitions.

Hamaji’s painting style is recognized as classic and academic, and thus his works may not be considered as “new” compared to the creations of some other Japanese painters who stayed in Paris at the same time period, such as Saeki Yūzo (1898-1928). However, its relentless depictions and compositions are very unique to Hamaji and mysteriously attractive. Only a few works are remaining until today and much of his personal history and career are still unknown. In recent years more of his works have been located and more information about his life has been gathered. This exhibition is the very first occasion to explore Hamaji’s creations as a whole after his death.

The Museum of Modern Art, Wakayama