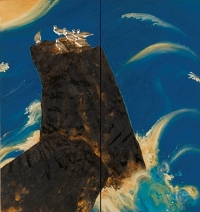 Hirafuku Hyakusui (1877-1933) was a Japanese painter who was born in Kakunodate-Machi, Akita Prefecture and active from the Meiji (1868-1912) to the beginning of the Shōwa (1926-1989) era.  Starting his career as a member of Museikai, which was an artistic society practicing naturalism, he then formed Sangokai and Kinreisha with his friends and publicized many works, while receiving a high reputation in government-sponsored exhibitions such as Bun ten and Tei ten.  He was also well known for his sketches and drawings, and thus worked as an illustrator for newspapers and magazines.

In this exhibition, Hyakusui’s various works in multiple fields of art are overviewed at their greatest scale ever, while depicting his interactivities with other artists and poets from the same time period.

the Miyagi Museum of Art