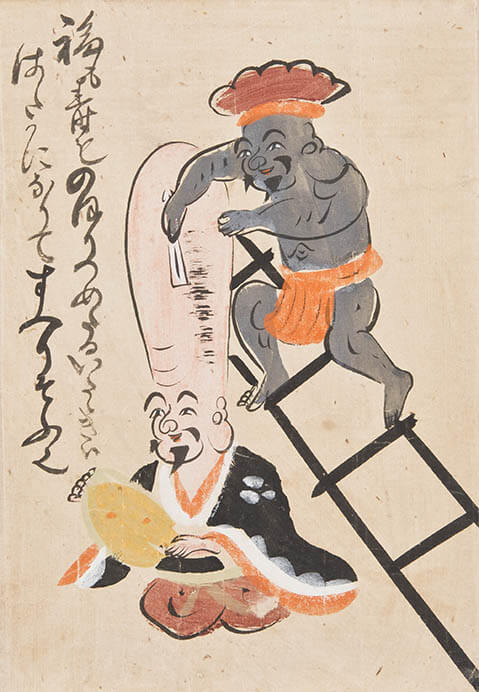 ŌTSU-E: Another History of Edo Painting

Up until now, Ōtsu-e exhibitions have mainly been held in museums and reference libraries, but very rarely in an art gallery. This is due to the fact that Ōtsu-e have been regarded primarily as historical documents and folklore materials. This exhibition, however, looks at them as art, and explores their charm as another form of Edo painting, one that does not belong to the Kanō or Rimpa schools, does not spring from the lineage of eccentrics that includes Jakuchū, and is not part of the Ukiyo-e tradition.

Ōtsu-e were inexpensive souvenirs that were mass-produced in the area around the Ōtsu post town on the Tōkaidō highway from the early Edo period onwards. Characterized by their direct and amusing appeal, Ōtsu-e spread throughout Japan, but there are not many still in existence today since they were regarded as cheap ephemera of everyday life.

As Japan modernized, Ōtsu-e lost their function as special souvenirs of the ancient highway but became a source of fascination for many cultural figures. Connoisseurs with an eye for beauty such as the literati painter Tomioka Tessai, the Western-style painter Asai Chū, and Mingei Movement founder Yanagi Sōetsu recognized the value of old Ōtsu-e in particular and collected such paintings. This trend continued after the Pacific War, with Ōtsu-e being collected by people such as the Western-style painter Koito Gentarō and the textile dyer Serizawa Keisuke.

This exhibition is a chance to view around 150 Ōtsu-e masterpieces that are known to have belonged to the collections of such famous connoisseurs from the early modern period.

* Some of the items on display will be changed during the course of the exhibition.