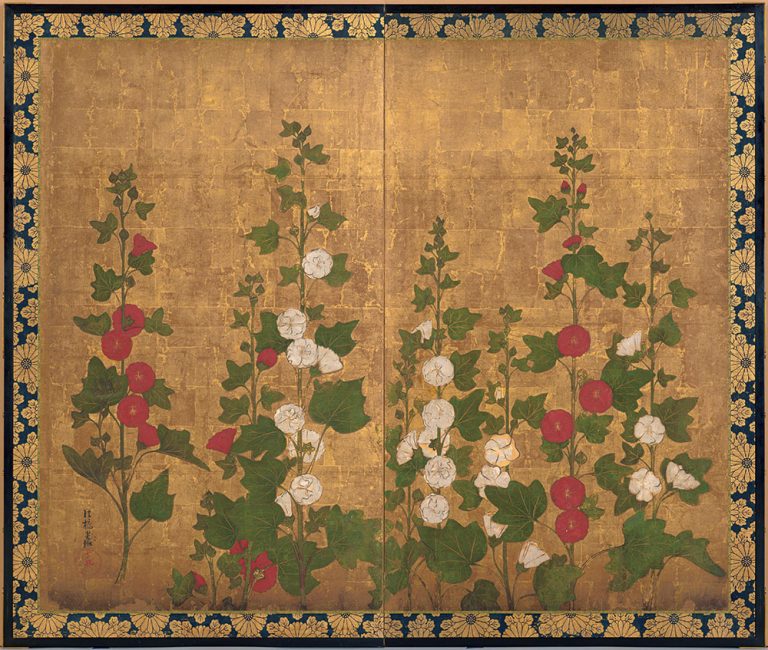 The Rimpa school of painting was initiated by Tawaraya Sotatsu in the early seventeenth century. It evolved through the work of Ogata Korin in the early eighteenth century and Sotatsu’s and Korin’s colleagues in context of the townsman culture of Kyoto, then Japan’s imperial capital. In the early nineteenth century, Rimpa was carried on by artists such as Sakai Hoitsu and Suzuki Kiitsu, in Edo (today’s Tokyo), the shogun’s headquarters. In Edo, the evolving Rimpa school became an urban genre with a decorative aesthetic at its core.

Impressionism was an innovative, modern school of art that emerged in Europe in the latter half of the nineteenth century. Centered on Paris, the Impressionists included artists such as Édouard Manet, Claude Monet, Edgar Degas, Pierre-Auguste Renoir, and Paul Cézanne who candidly expressed their impressions of their everyday experiences and the delights of urban lifestyles.

This exhibition is an innovative attempt to compare and survey, through works by artistic geniuses nurtured by urban cultures in Japan and Europe, East and West, what the sophisticated aesthetics characteristic of major metropolises achieved. The exhibition includes the Impressionist masterpieces that are the core of our collection and Rimpa works from our collection being shown for the first time, plus masterworks from temples and museums in Japan. The hundred exhibits include two National Treasures and seven Important Cultural Properties. Rimpa and Impressionism, a watershed exhibition, makes “urban culture” its lens in reassessing Eastern and Western art.