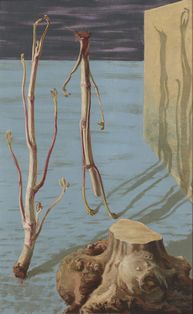 Advanced by French poet André Breton (1896-1966), Surrealism became one of the most influential art movements of the 20th century. With Philippe Soupault (1897- 1990), Breton devised the technique of Automatism in 1919, one year after World War I ended. Connected to the idea of the unconscious mind in psychoanalysis, the methodology of Automatism was to create poetry by moving pen on paper as rapidly as possible. Having experienced the unprecedented devastation of World War I, Breton and Soupault questioned reason based modern rationalism and sought a new aesthetic to express the ‘surreal’ lurking in reality. Breton’s 1924 Surrealist Manifesto allowed for the gradual spread of Surrealism beyond the field of literature to painting, and eventually to the collages of Max Ernst (1891-1976) in Germany’s Dada movement and Salvador Dalí (1904 -1989) in Spain.

Surrealism reached Japan in the 1930s and, translated into Japanese as “ultrarealism” (cho-genjitsu shugi), generated a great sensation as the latest avant-garde style. Eventually, with the admixture of Eastern thought, the original search for the unconscious was lost in Japan and Surrealism became understood as art of a strange fantasy world, popularly referred to in mass media as ‘Shuru.’

This exhibition focuses on the development of Surrealism in painting in Europe and Japan, its influence on post-war Japanese art and, through the work of contemporary artist Tabaimo, the transformation in Japan from Surrealism as a significant 20th century art movement to the popular idea of ‘Shuru’ – art of the unreal and incongruous.