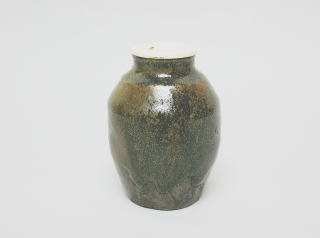 Tea Utensils from the Museum Collection:
Chaire and Usuchaki, Tea Caddies for Thick and Thin Tea

Chaire, or ceramic tea caddies used for thick tea ceremony, have come to be produced in Japan to substitute for more expensive models imported from China (karamono chaire). The production stated in Seto and gradually spread to other regions such as Shigaraki, Tanba, Zeze and Takatori. Tea caddies have been cherished and valued by many tea masters above all other tea utensils — some are passed down with several bags specially made with each tea master’s preferred brocades, and some others are named after old waka poetry.

On the other hand, usuchaki, or lacquered tea containers, have become more commonly used instead of ceramic tea caddies for their austere refinement, and gradually were established as a standard utensil to be used for serving thin tea. The most well known example of this kind is natsume in Rikyū style.

This exhibition mainly introduces tea caddies made in Satsuma, Takatori and Shitoro kilns with accompanying boxes, hikiya (wooden containers), letters and documents, in addition to the Seto “avalanche” chaire with a poetry card by Kobori Enshū, and a Bizen chaire with “Shinbei’s kiln” seal. In the category of lacquered tea containers, variations of shapes and lacquer techniques including makie and mother-of-pearl inlay are on exhibit.

Enjoy the diversity of expressions presented by chaire and usuchaki, which are more than merely being containers of powdered green tea.