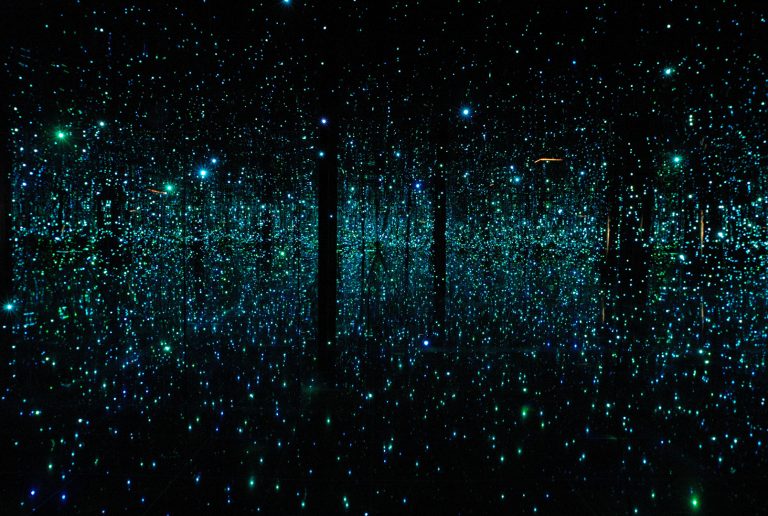 Yayoi Kusama: You Who Are Getting Obliterated in the Dancing Swarm of Fireflies

Yayoi Kusama’s You Who Are Getting Obliterated in the Dancing Swarm of Fireflies is one of the artist’s more whimsical works. Inspired by a Japanese folktale about a person in a field with 10,000 fireflies, Kusama’s work brings the fairy tale to life. Beginning with drawings and paintings, Yayoi Kusama’s work transformed from 2-D pieces to large-scale installations, symbolic of the obsessive and massive nature of her ideas. Subsequently, Kusama’s art began to take large forms and often covers and utilizes entire rooms and spaces.

The piece is a dark room lined with mirrors on every surface and strands of looping LED lighting suspended from the ceiling. This deceptively small room feels as if it’s a vast, infinite galaxy of lighting and allows the viewer to enter and be surrounded, or obliterated by Kusama’s fireflies.

Yayoi Kusama’s Infinity Mirror Room explores the psychedelic sensations of the ‘self’ and the artist’s ongoing hallucinations that started when she was a child. In this work, Kusama’s repetitive and extensive use of polka dots, mirrors, and LED lights explores infinite repetition and encourages you to ‘obliterate’ your personality and become one with eternity.
A pioneer of perceptual experiences, Kusama expresses a complex balance between her psychological obsessions and her aesthetic control over them. In the late 1950s, she left Japan for New York City. Her work spans paintings, performances, installations, sculptures, films, fashion, and literary works. They transcended the Pop and Minimalist movements of the twentieth century and reflect the mind-altering spirituality of hippie culture.

※Phoenix Art Museum is temporarily will be open to members on October 1 and to public on October 14.